Three Lessons in Seduction, Book One

Tempted by the Viscount, Book Two Orphaned as a child, Nylander has never known a real home. Now he is ready to leave the dangers of his past behind and put down the roots he has always longed for. The only thing standing in his way is a lanky aristocratic lady who is more at home on the farm than in the ballroom. And she has secrets… 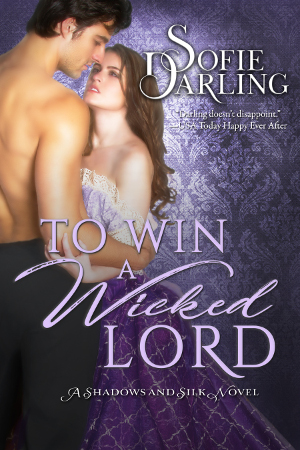 Ten years after his family gave him up for dead, British spy Lord Percival Bretagne is back home, but his mission is far from over. Playing the aristocrat in London gambling dens and at country house parties is just a cover for Percy’s real quest. He’s hunting the man who stole everything from him—his family, his marriage, even his identity. And this time nothing, and no one, will stand in his way.

She’ll Risk it All……

At the Pleasure of the Marquess, Book Five Their quest takes them back to Hortense’s dark past as a child pickpocket, where she and Jamie will have no choice but to work together to do the bidding of a powerful thief lord—even if that means marriage! Despite their chaste intentions, passion flares and as they grow closer Jamie and Hortense can’t help but wonder if love will be enough to make their marriage more than a masquerade…

One Night His Lady, Book Six Just one night changed their lives…

When Spanish émigré Eva Galante meets French aristocrat Lucien Capet, it’s love at first sight. But their meeting isn’t by chance, and Eva isn’t who Lucien believed her to be. After a whirlwind romance and a flight to Gretna Green, Lucien learns the truth about what loving Eva could cost him.

A single betrayal tore them apart…

Four years later, Eva is London’s most sought-after modiste and Lucien is now Marquis de Touraine, about to become engaged to Eva’s best client—as long as he’s not still married to Eva! Confronting their past means a journey across England to the Scottish border. With each mile memories are raised, and passions reignited, sparking one last night together. Or so they think…

Can a second chance reunite them forever?

But the past isn’t ready to give up its secrets just yet. As Lucien and Eva confront an old foe, new truths are revealed… and a deeper understanding of each other that love-at-first-sight never gave them. Despite the betrayals of the past, feelings are rekindled that were never quite extinguished. Will one last secret pull them apart—or bind them together forever?